Taking a moment to thank all of my fans in the United Kingdom! I sell a lot of prints to British folks. And I am just sending some LOVE your way. 🙂

Do as the Romans do.  I always thought that meant something scintillating, but all it really means is: It is polite, and possibly also advantageous, to abide by the customs of a society when one is a visitor.  Oh well.

Today’s map study is the beautiful country of Italy!  When I think of this place, my first thoughts are always about food.  Italian plays a part in my heritage so I can tell you that there is nothing like a homemade pasta sauce with fresh herbs and spices.  There is an art to perfect marinara. It cooks slowly all day long.  The smells that fill the house are insanely taunting.  Turns out that I have Celiac disease and all of that pasta I grew up with was tormenting my insides.  5 years ago I switched to Gluten Free fare and get to still enjoy those delicious tastes!

Some fun facts about Italy:

*  Italy is approximately 116,400 square miles (including Sicily and Sardinia), which is slightly larger than Arizona.

*  Italy is said to have more masterpieces per square mile than any other country in the world.

*  When McDonald’s opened in 1986 in Rome, food purists outside the restaurant gave away free spaghetti to remind people of their culinary heritage.

*  Parmesan cheese originated in the area around Parma, Italy. Italians also created many other cheeses, including gorgonzola, mozzarella, provolone, and ricotta. No one knows when the pizza was invented, but the people of Naples made it popular.

*Vatican City is the only nation in the world that can lock its own gates at night. It has its own phone company, radio, T.V. stations, money, and stamps. It even has its own army, the historic Swiss Guard.

*Over 50 million tourists a year visit Italy. Tourism is vital to Italy’s economy and provides nearly 63% of Italy’s national income.

All the ladies in France,

So they walk around town,

With their hineys hanging down.

As a kid we used to sing this little song that ended with all of us giggling at the thought.  I have no idea where this ditty came from, but I had the impression for many years that French ladies never wore panties!  Funny.

It is interesting what you “think” you know about a country that you have never visited or studied. I grew up on a horse ranch in Myakka City, Florida and we were not cultured or exposed to much outside of our little town.  It wasn’t until I moved away at 18 that I started to learn more about the real World.

As a youngster the French brought us french toast, ballet, french fries, armoires, croissants, brassieres and pie a la mode.  But they did not bring us panties!

Some interesting facts about France:

* There is a Victor Hugo street in every town in France.

* France produces over 400 types of cheese!

* Crayola is a French word that means “oily chalk”

* The number of times the French kiss each other as a form of greeting varies depending on region. In Corsica, the number of kisses can be as many as 5!

* The French had an early version of the internet called Minitel, where as long as 1984, they could pay bills and shop at home using the Minitel service.

* Paris nicknamed “city of lights,” lights actually refers to the number of intellectuals who live there

I am continuing to work on my map series and England is my next offering. Why not the United Kingdom?  The United Kingdom is not a country.  It is actually 4 countries grouped together (England, Scotland, Wales and Northern Ireland).  Seems Scotland is working towards independence so who knows what that map will look like in the near future.  So I just chose England as a stand alone.  It’s a beautiful shape for an artist to work with and I am pleased with the finished image.

Some fun facts about England:

1. Big Ben does not refer to the clock, but actually the bell.
2. London has been called Londonium, Ludenwic, and Ludenburg in the past.
3. French was the official language for about 300 years
4. The shortest war against England was with Zanzibar in 1896. Zanzibar surrendered after 38 minutes.
5. There is nowhere in Britain that is more than 74.5 miles from the sea.
6. The first telephone directory published in England contained 25 names.
7. While the Great Fire of London was largely destructive, the casualty rate was just 8.
8. The first hot chocolate store opened in London.
9. There are over 300 languages spoken in England.
10. The English drink more tea than anyone else in the world.

Oh and how about a flag?  England has a fine flag with a red cross over a white background.  I have not done an image for that yet.  But I do love the United Kingdom’s flag for it’s bright contrasting colors and interesting design.  It’s so distinctive and eye catching. Another artist’s dream. 🙂 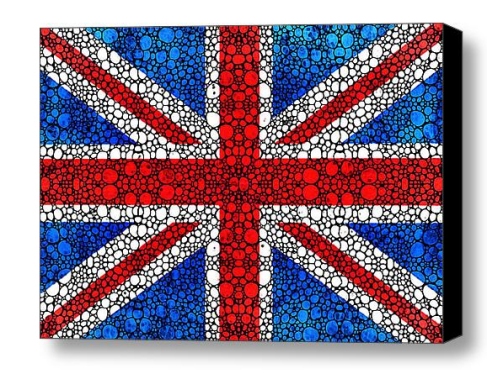 It is said that reading takes you to far away places in your mind and let’s you experience a place without moving from your chair.  I feel the same way about painting and creating.  I can choose to go to Paris, France for instance.  I can immerse myself in colors and shapes from any time and place.  Looking at this view of the Eiffel Tower “takes me there” in a way.  It is such a magnificent structure that I feel I have enhanced in my art.  This piece is a composite painting using a vintage post card and layers of other imagery.  My choice of nebula brings to mind a timelessness and connectivity of all.  I can see this place…and if I close my eyes, I can feel it too….