I am going to be in an art show.  This doesn’t sound like big news as most would expect that an artist would be in art shows.  However, after 10 years as a professional artist this is my first show.  My career has not followed a traditional path due to certain physical disabilities that I have faced over those 10 years.  I’ve never made an issue out of them and I never wanted anyone to buy my artwork out of pity, so you will not see mention of any of it in my bio.  Even most of my friends never knew of my greatest issues as I suffered in silence.  Some learned of it as I had times where I could not avoid telling them because it was severe when I was with them.  Most of the time, I just found ways to cope so no one would know.  My two disabilities were severe gastrointestinal problems and vertigo, both of which kept me out of shows and a lot of other things in life.  I learned a few years ago that I had Celiac disease and I started eating gluten free.  It has taken awhile for my body to heal, but it has to a point where I am now confident to go out and spend a day with the public without worries of needing to go to the bathroom often or worse not being able to stand or walk.  It is not easy for me to share these things publicly, but now that they are in my past, I am o.k. with it.  I am just delighted to look toward the future with hope and joy!  I will post an invitation a week before the show, but it is the 5th Annual Arts In The Park in Ybor City here in Tampa on December 14th from 9 – 4.  It is a juried show and I am delighted to have been chosen!  Stay tuned!

It has been said there are many roads but only one journey.  I have always liked that. Right now I feel as if I am on an odyssey with my artwork.  It is growing and expanding in directions that I never imagined it would.  I see no limits to what I can do.  I am also branching out from the traditional paint and list model.  I am really getting into my digital work and find it comes to me with ease and joy.  And best of all they are selling which gives me satisfaction in my work as well….I’ve got my creativity shoes on and will continue to see where this road takes me…. 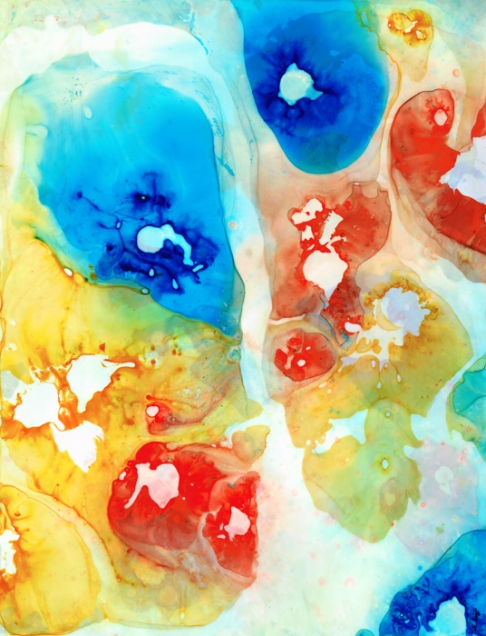 It only sounds “naughty”.  I recently purchased some translucent Yupo which is quite different from the white Yupo I normally enjoy painting on.  I started slinging paint and found that it didn’t quite look as vibrant as I normally like, so I stacked a few up and set them aside.  Later I came back to the stack and realized that the “layers” actually created a cool image.  “Vitality” is a combination of 3 paintings stacked one on top of the other with the translucence allowing a small amount of each to show.  I will be getting layered again real soon. 🙂

You can get layered here: